Proud to Wear the Patch 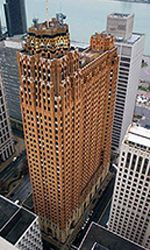 In 1963, the National Appliance Service Association, NASA proposed a merger with C-FESA. However, after further review it was decided that C-FESA would maintain its autonomy and advised NASA of this decision. However, this proposal was introduced again by NASA in 1968, with the same results.

The first trade show that C-FESA participated in was the New York Hotel and Motel Show, NH&M in November 1963. The booth space was complimentary for this show. The booth was manned by the Board of Directors in 2-3 hour shifts.

In November, 1964 at the Board of Directors meeting the quarterly meetings were abandoned and the bi-annual meeting format was adopted. The meetings were held in May in conjunction with the NRA show and in November in conjunction with the New York Hotel & Motel Show, in Chicago and New York respectively. At this meeting the subject of a "training program for maintenance mechanics for commercial food equipment" was raised and agreed to be investigated. It was at this meeting that warranty report forms were introduced as a consideration for C-FESA members.

Take the time to view the presentation: CFESA: The Early Years PowerPoint Presentation

Find information on Conferences, Committee Activities, Training and other news and events.

By signing up for our free e-newsletter you will be notifed of recent happenings.